Why Singapore's Changi Airport is a destination in itself

Home/Why Singapore's Changi Airport is a destination in itself
Next

Why Singapore's Changi Airport is a destination in itself

Where are you staying on hols? Singapore Airport! Tropical gardens, waterfalls, nature trails… Changi may be the only airport in the world that’s a destination in itself

By Mark Porter For The Daily Mail

The new-look Changi Airport in Singapore is roughly two- and-a-half times the size of the Vatican. More than £1 billion has just been spent on a massive revamp of the airport, which is now unlike any other on the planet. Changi has decided to bring the jungle of South-East Asia into the terminals.

The result is the Jewel, a new landside central area of tropical foliage with the thickest jungle in a section beneath a high glass dome referred to as Shiseido Forest Valley. This is spread over five floors and contains 3,000 trees, 100,000 shrubs and an abundance of orchids.

There are 220 species of plants flourishing in an atmosphere cleverly maintained at constant a temperature of 23c and humidity of 65 per cent. Forget stale, stuffy lounges, a whole new ecosystem seems to have sprung up. 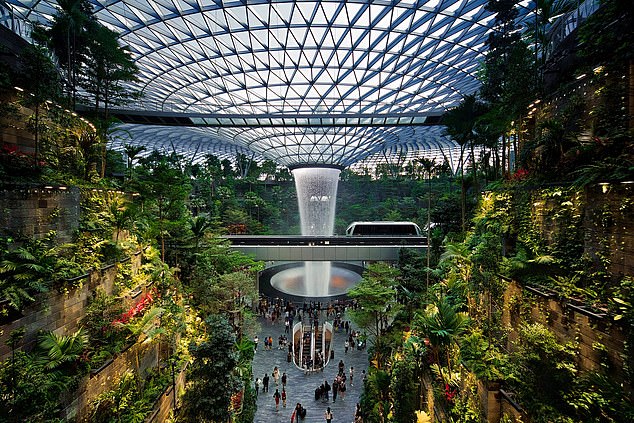 Tree and easy: The Jewel is a new landside central area of tropical foliage with the thickest jungle in a section beneath a high glass dome referred to as Shiseido Forest Valley

It is all part of Changi’s strategy to wrest away passengers from the likes of Dubai, Doha, Bangkok and Hong Kong in the lucrative ‘stopover’ market, where planes land to refuel and passengers take a break on long trips across the globe, often heading Down Under.

Changi already attracts 65 million passengers a year on 100 airlines at a rate of more than 7,400 arrivals and departures a week, and it wants more. But do all the fronds and butterflies — yes, real butterflies — work?

First port of call is Shiseido Forest Valley. After my long flight from the UK and a night in the airport’s Crowne Plaza, I go to the green heart of the place to find a quiet space surrounded by dense undergrowth. The first feeble rays of sunshine light up a lofty canopy. A butterfly drifts off into a plume of mist and is that the throaty warble of a bird of paradise greeting the murmurings of dawn?

No sign of a WHSmith. It feels more likely that you’ll meet a Japanese soldier left over from World War II or Dr Livingstone than a newspaper vendor or burger-flipper.

Up ahead through the trees, a ghostly shimmering and pulsing tube of water arises like some giant extraterrestrial emanation. The noise of gushing water gets louder and there it is: the Vortex (officially the HSBC Rain Vortex). This is a striking waterfall in which the water cascades from an oculus at the top of a 130 ft high concave glass tube.

It is the world’s tallest indoor waterfall, pumping 500,000 litres of rainwater from bottom to top. This most recent project, opened in June, has created a whole new world under glass.

Changi is now far removed from the fishing village it was until 1981, when the airport opened. 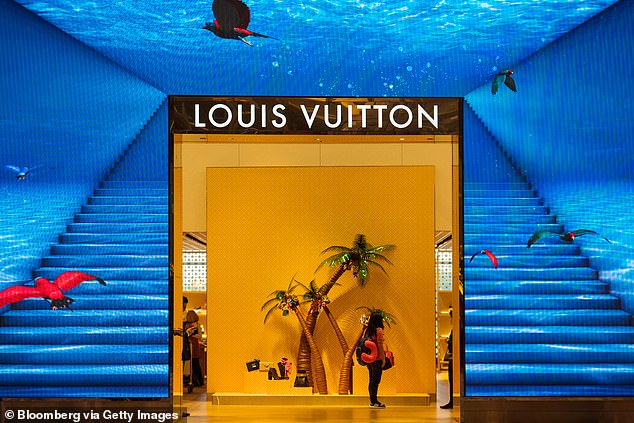 Further on, there are Tarzan vines, little waterfalls and rubber trees. This is a place to breathe in the oxygenated air and admire the giant orchids. It is simply baffling to consider that the runways of one of the world’s biggest airports are little more than a stone’s throw away: a flight every 80 seconds.

Stillness and silence, not the faintest breath of air. But then, from beyond a silky bamboo thicket and tumbling bougainvillea, comes a rumble of falling water. This is bizarre.

‘The concept was really the Garden of Eden,’ says Moshe Safdie, the architect behind the Jewel. ‘Concepts can be quickly dated and people can get bored so we came up with something timeless. A living space.’

It is a fascinating place and I spend two days roaming around Changi, hopping on the skytrain or walking between terminals, via Jewel, to check out the birdsong garden where you can listen to the Greater Racket doing just that.

Or visit the butterfly garden where an extravagant collection feed off sliced pineapple in their very own paradise.

A walk through the intimate depths of the forest along one of two ‘trails’ that snake from the bottom of the crater to the top level is a good way to loosen muscles after a flight.

This top section is known as the Canopy Park. If the term is a little overblown to describe a cunningly disguised series of stairs and terraces, no matter.

Walk in the shade of lataniers and ficus, while admiring flowerbeds of arums, taros or ferns. It is a curious triumph of endeavour over practicality. The plants came from China, Malaysia, Thailand, Australia and the United States.

‘Most have spent four years in our nursery to get used to the air conditioning,’ says Khaja Nazimudden, the head horticulturist who has a team of 30 gardeners.

Changi continues in the tradition of Singapore, the garden-city state where there are 18 nature reserves. Such is the devotion to greenery that vertical gardens, planted on walls and the sides of buildings, are springing up all over. 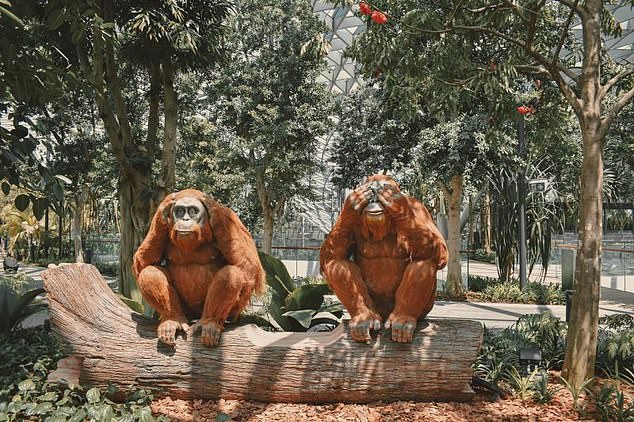 Many thousands of Singaporeans have already visited the tropical gardens of the Jewel just to be here. The airport has become a tourist attraction in its own right with its myriad retail outlets and vast food halls attracting locals on short staycations. Conspicuous consumption? Yes, there is plenty of that: 155 shops altogether and 105 dining options.

As well as the nature trails, attractions for children include an area where mist is sprayed and an elevated area of netting for clambering about and bouncing in. There are also mazes, slides and a high-level canopy bridge.

Tickets are required for some of these ranging in price from £3 for the slides to £12 for the netting, and details are online (see below).

The former swamp that was also once a Japanese prisoner of war camp from 1942-45 has come a long way.

From a jungle, back into a jungle, Changi has gone full circle. I’ve never liked airports but this one is a headturner.

Mark Porter flew on Finnair’s new daily A350 service via Helsinki to Singapore from Heathrow, Edinburgh and Manchester. Fares start from £547 return (finnair.com). Doubles at the Crowne Plaza Changi Airport hotel from £150 (crowneplaza.com).